The editors of Communio are pleased to announce the inauguration of a new series entitled Why We Need . . .

"A Cloud of Witnesses": Introducing Why We Need...

The editors of Communio are pleased to announce the inauguration of a new series entitled Why We Need . . . The three dots stand for the names of philosophers, poets, scientists, painters, musicians, theologians, and others whom we think Catholics today ought to—need to—know or know better. . .

Why We Need Paul Claudel

Why We Need Christopher Dawson

“It is not just Dawson’s ideas about culture in general, and Christian culture in particular, that continue to be fertile, but his ideas about how specifically the West was formed.”

“Ulrich has developed a philosophy that is perhaps better equipped than any other to mediate between the parties in the strained relation between philosophy and theology, reason and faith.”

Why We Need Maurice Blondel

"Blondel saw that it was necessary in philosophy to raise the question of a supernatural religion, even if it cannot be answered within the scope of philosophy or of reason alone."

Why Do We Need the Philosophy of Edith Stein?

"The science of the Cross involves the subject to the point of its own annihilation and abandonment into the meaning of being. The paradox is that this abandonment represents a foundation for knowledge."

Why We Need Coventry Patmore

“With his eye turned firmly outward and upward—to the world and to God—Patmore’s writing reveals a keen perception of the infinite disclosed in every single finite creature.”

Why We Need Erich Przywara

“Life, for Przywara, becomes a doxological act of service where God’s unsurpassable glory is sought and served in all things.”

Why We Need Nicholas of Cusa

Why We Need Julian of Norwich

“The act of yielding up his ‘Adamly’ soul is the human realization of the Son’s eternally eager readiness to do that which the Father wills.”

Why We Need Alexander Schmemann

“Our crisis is one in which liturgy is no longer the source of our vision, theology is alienated from life, and piety is fed by soft sentimentalism.” 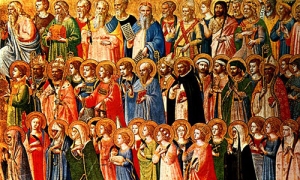