“The Church, [many of the Fathers] say, continues to live by the pardon that transforms her from a harlot into a holy Bride.”

It is surely not without significance that Hans Urs von Balthasar chose to republish “Casta Meretrix,” his now classic study of the holiness and the sinfulness of the Church, on the very eve of the Council in 1961.1 The significance of this gesture is underscored by his simultaneous republication of another article, “Who Is the Church?,”2 which complements the first through its emphasis on the Church’s identity. While the first explains the sense in which the Church can call herself at once “harlot” and “chaste” before her Lord, the second grounds this because she is a subject who is really distinct from her Bridegroom. These two essays doubtless share a certain affinity of spirit with an important statement in Lumen gentium, which speaks about the Church in terms to which the hierarchy had hardly accustomed the faithful:

While Christ, holy, innocent and undefiled knew nothing of sin, but came to expiate only the sins of the people, the Church, embracing in its bosom sinners, at the same time holy and always in need of being purified, always follows the way of penance and renewal. (LG, 8)

This passage draws a stark contrast between the total absence of sin in our Lord, which is in fact clearly affirmed by Scripture (cf. Heb 7:26), and the Church’s earthly wayfaring condition, to which the words of St. John apply: “If we say we have no sin, we deceive ourselves . . .” (1 Jn 1:8–10). Taking their cue from this statement, Popes John Paul II, Benedict XVI and Francis have not shied away from inviting the “penitent” Church (Paul VI) to acknowledge publicly that she is a sinner and to beg the Lord’s forgiveness. Their interventions and initiatives in this regard have provoked diverse reactions among Christians and non-Christians alike. Indeed, both the conciliar statement and its pastoral implementation continue to raise a number of difficulties for the conscience of faithful Catholics.

Granting that we cannot simply identify the Church with the society of “the good,” because “the wicked” are part of it as well, granting that the Church’s faithful and even her pastors are affected by this mixed condition, can we legitimately say the same thing of the Bride “without spot or wrinkle or any such thing . . . holy and without blemish” (Eph 5:27), “clothed with fine linen, bright and pure” (Rev 19:8) of whom the New Testament speaks? What is the relation between the Church’s essential possession of holiness and the fact that she not only contains sinners in her bosom, but is herself a Church of sinners, or even, as some will say, a sinful Church? How can a Church that prays “forgive us our trespasses” in the name of her children consider herself at the same time to be the source of their sanctification? Could it be that the holiness which the Creed names as one of her essential traits actually belongs only to God, her Triune Author, but not to her concrete, visible reality as a fallible human society? Does holiness begin to belong to the Church herself only in the eschaton when she enters into possession of the heavenly homeland?

Such a claim would contradict an important conviction of the faith. In former times, YHWH pledged to “cover” Jerusalem “with the robe of righteousness” (“as a bride adorns herself with her jewels,” Is 61:10). Similarly, he bade believers to look toward the accomplishment of a still future reality (“I [will] create Jerusalem a rejoicing,” Is 65:18). Now, however, the Old Covenant has been fulfilled in the New. With the advent of Jesus, the “fullness of the times has come” (Gal 4:4) and we have thus already truly entered into “these last days” (Heb 1:2). Doesn’t this suggest that Christians, unlike the Jews, are not fated to lament the lost ideal of life in the desert during the Exodus, when Israel, still a child, did not know any foreign gods and faithfully followed YHWH, who was present in the cloud (cf. Hos 2:16)? What exactly, then, is this Church about which the People of God proclaims, after professing its faith in the Holy Spirit: “I believe . . . one, holy . . . Church” [without the Latin or English preposition in]?

These are the questions we intend to address in what follows. We will begin by calling to mind the gesture with which John Paul II opened the Great Jubilee: his invitation to the Universal Church to walk the path of repentance nicely accords with Balthasar’s thought. After briefly sketching the patristic topos of the Casta meretrix, we will present Joseph Ratzinger’s account of this ancient motif, which is indebted to both Balthasar and de Lubac. At this point, we will turn to the other theme mentioned above: the personal identity of the Church, which in our opinion is the key to understanding the sense in which she confesses her sins and bids the faithful not to fear the humiliations of which the world is frequently the instrument today.3

1. Hans Urs von Balthasar, “Casta Meretrix” (=CM), in Explorations in Theology, vol. 2, Spouse of the Word, trans. John Saward (San Francisco: Ignatius Press, 1991), 193–288. [Note: Many of the citations of the Church Father’s writings are taken from Balthasar’s essay as they appear in the English translation.] 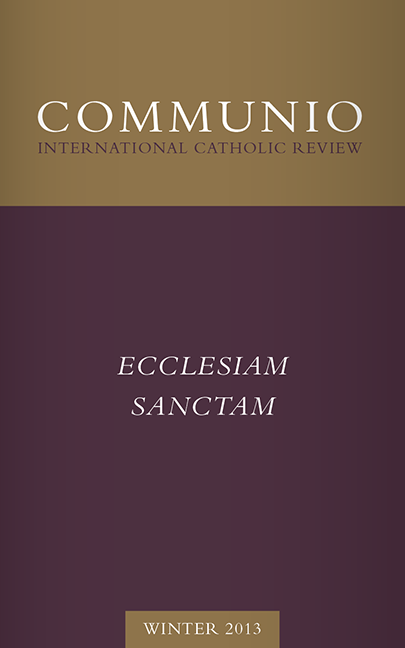