“Like at the wedding at Cana,” affirms an old man at the extravagant French dinner in Babette’s Feast, “the food is not important.”1 Yes, surely something more than drinking and eating is at stake in John 2:1–11. The same holds for the film itself, which, though it revolves around a seven-course meal offered to poor villagers, “is not a film about cooking,” nor is the dinner whatsoever “an end in itself,” as the Danish director Gabriel Axel makes clear in an interview.2 But does all this make food and wine irrelevant? If they point beyond themselves, do they therefore disappear? At Cana, the Lord uses them as “signs” to reveal “his glory” (Jn 2:11), but this glory appears less as a scalding light, as it were, than a flickering candle, almost hidden. The Son of God settles in mystery among the festgoers, changing reality subtly from within: “the headwaiter tasted the water that had become wine, without knowing where it came from” (Jn 2:9). The spirit of love and forgiveness that blows suddenly among the guests at Babette’s banquet comes in a similar quietness, and indeed, the film itself demands to be viewed with an eye for mystery rather than analysis. “It’s a fairy tale,” Axel warns, “and if you try to over-explain it, you destroy it.”3 Based on Danish writer Karen Blixen’s 1950 story of the same name, Babette’s Feast is neither “about religion” nor “about cooking,” but rather “a series of portraits,” centered on one woman’s leaven-like effect on a rural Protestant community.

Instead of offering a schematic interpretation, this essay will take an extended look at the film, supported by Hans Urs von Balthasar, who shared Axel’s confidence in the unity between the spirit and the senses: “It is with both body and soul that the living human being experiences the world and, consequently, also God.”4

1. Hereafter, where quotations in this essay are not footnoted, they are taken from the English subtitles of Babette’s Feast, directed by Gabriel Axel (2007, Twentieth Century Fox Home Entertainment), DVD. Unless otherwise indicated, all citations in this essay are to works by Hans Urs von Balthasar (Freiburg: Johannes Verlag Einsiedeln), published in English by Ignatius Press (San Francisco). All citations to Balthasar’s books from Johannes Verlag are from the most recent editions. 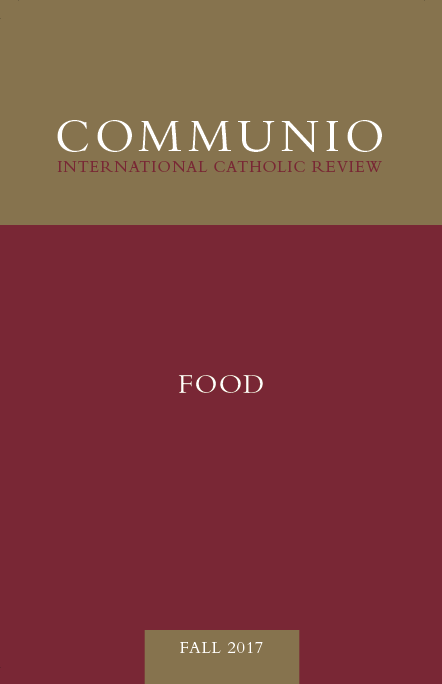