The dictionary defines the word “crisis” as “a time of intense difficulty, trouble, or danger,” but its etymological root is the Greek verb kritein, meaning “to judge” or “to discern.” A moment of crisis will provoke heated discussion and demands for change, but a genuinely fruitful response requires discernment: a serious judgment, that is, a thoughtful effort to get to the root of the problem, and a recollection of the fundamental truths on the basis of which to engage it. This issue presents the papers prepared for the Fall 2018 symposium convened by the John Paul II Institute to discuss the essential realities of the faith at stake in the crisis that now faces the Church. It meditates on and examines the office of priesthood and the vowed states of life—consecration and marriage—in light of our current disenchantment with them. Is it possible now, with what the crises have exposed of human frailty and the tendency to corruption, to live these fundamental vocations in fidelity and truthfulness? As we seek to discern the signs of the times, how can the suffering of the Church guide us to repentance, clarity, and a new birth?

One of the most serious questions raised in current discussions concerns the meaning of consecrated virginity. Paolo Prosperi reflects on the call of the consecrated person to give himself or herself entirely to God in an article entitled, “Do Not Hold Me: Ascending the Ladder of Love.” In contrast to the contemporary tendency to view virginity in negative terms as a deprivation, the elimination of a due human good, Prosperi illustrates how it represents “the hyperbolic intensification of that possession in detachment we are all given to experience in the contemplation of the beautiful.” Conjugal love and consecrated virginity are not simply opposed, but are reciprocally related such that, considered from the perspective of this reciprocity, each brings to light a profound truth in the other. What virginity thus shows itself to be is not a rejection of the goodness of the body and the material world created by God, but a letting go that coincides paradoxically with a deeper union with the world in Christ. Consecrated love is thus essentially fruitful, giving life to the world as it “overflows into a greater passion for the salvation of all souls.”

In “Friends of the Bridegroom: Reflections on Priestly Fatherhood in Light of Contemporary Challenges,” Antonio López observes that the current crisis in the Church “represents a call to rediscover what priestly existence is about and to re-decide with greater awareness, freedom, and totality in its favor.” He thus considers the mystery of the priesthood, which is both nuptial and paternal, as bringing together two essential aspects of the incarnate God’s faithful love for his people, both of which involve the integrated maleness of the priest as embodied icon of that love. If we recognize the role of the body and the essential nature of the sexual difference, López argues, then “it is possible to see the conflict affecting the paternal and spousal dimensions of the ordained priesthood centers on one point: the rejection of the fruitful receptivity proper to love.”

In “The Contribution of St. John Paul II to the Integral Human Formation of Priests,” Carter Griffin demonstrates the desperate need for better human formation of our seminarians, since it is the “priest’s very humanity that Christ will use as ‘an instrument of salvation.’” A full and generous humanity, so exemplified by John Paul II, is a “decisive contributor” to the fruitfulness of a priest. Through a fuller and more human formation, our seminarians and priests will be prepared to respond to the crises of chastity, charity, and fatherhood in the Church and the wider culture.

Jeanne H. Schindler, in “Educating to Love,” contemplates the intimate formation we receive in family life, which initiates us into the life of the Church and educates us about who we are and what our place is in the cosmos. The current problems facing the Church and culture are rooted in an intellectual condition that denies this created order. She argues that the diagnosis of the current crisis as simply a moral failure is far too narrow, for the crisis “is significantly an intellectual problem, a problem, that is, of ideas.” Countering it thus demands a recovery of genuine vision, an understanding of the created order of things in the broadest and deepest sense, and so a “vigorous renewal of education within our homes, schools, parishes, universities, and seminaries.”

The gift of divine love, given particularly in the Eucharist, is mediated to each of us through our state of life. Nicholas J. Healy Jr. reflects on the inherent connection between the totality of the eucharistic gift and the totality of the vow in marriage in his essay, “Marriage, Priesthood, and the Sincere Gift of Self.” As new pastoral and doctrinal challenges arise, there is a need for a deeper understanding of the relationship between the married state and the priesthood, as well as their mutual illumination. The point of convergence lies in the Eucharist, interpreted precisely as a nuptial mystery. From this perspective, we come to see that the priesthood “mediates the objective presence of God’s grace in the life of the Church,” while marriage discloses and safeguards “the spousal nature of the covenant between God and creation.”

In Retrieving the Tradition, we take the occasion of the reflections on priesthood as a total gift of self to present the first-ever English translation of Maurice Blondel’s famous “Letter to Fr. Bieil: The Discernment of a Philosophical Vocation.” As Emmanuel Tourpe, the editor of the new French edition, explains in his “Critical Introduction to Blondel’s ‘Letter to Fr. Bieil,’” Blondel wrote the letter to help illuminate his discernment of the possibility of a vocation to the priesthood. The letter thus offers an insight both into the meaning of the ideal of priesthood, and also into Blondel’s own conception of his mission as a Catholic philosopher. 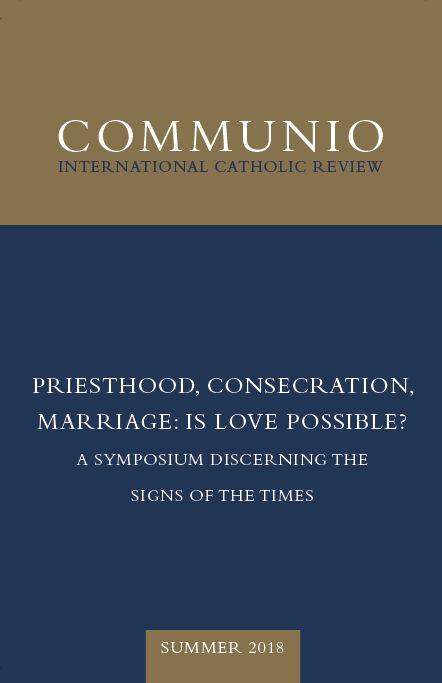