Before this issue went to press, Communio was granted permission to include an excerpt of Pope Emeritus Benedict XVI and Cardinal Robert Sarah’s forthcoming book, From the Depths of Our Hearts, which we are pleased to present in the Notes & Comments section.


The Summer 2019 issue of Communio is dedicated to the theme “Mary, Motherhood, and the Church.” According to St. Bernard of Clairvaux, Mary’s consent to bear the divine Word in the flesh is the word that all the world has awaited. If the event of the Creator’s conception in his creature’s womb is that around which the whole of history revolves, Mary’s free participation in this consummate miracle not only surpasses but also represents the perfection of all human action, and so clarifies most fully what it is to be a finite person. As the articles collected here attest, Mary’s maternity of Christ brings more fully to light the profundity, dignity, and centrality of natural motherhood, and at the same time gives us to see the unique existence of the Christian, who sacramentally shares in the fecundity of the bridal Church into which he is incorporated.


Paolo Prosperi inquires into the fittingness of Mary’s role in the Incarnation in “‘Fixed End of the Eternal Plan’: Rereading Cabasilas’s ‘Homily on the Annunciation.’” Taking inspiration from a homily published elsewhere in this issue, Prosperi affirms that God’s goodness is manifested most perfectly by his willingness to depend on Mary’s fiat for the fulfillment of his sovereign act of saving mankind. “God cannot help but desire to make of the Virgin the efficient cause of the Incarnation, precisely because the final cause of the Word becoming flesh is not simply the redemption of sin, but the greatest possible revelation of God’s love for mankind, which implies precisely such a gift.” The fully-reciprocal communion with God realized in this event is, then, that for the sake of which the world is given to be in the first place.


D. C. Schindler, in “The Exclusivity of Gender and the Gift of Motherhood,” reflects on the difference between man and woman, and on what this difference reveals about creaturehood before God. Schindler plumbs the metaphysical significance of the fact that each gender is defined at root by its relative role in the act of begetting. “[W]hat it means most profoundly to be female is to transcend oneself by taking what is other into oneself in a fruitful way, and what it means most profoundly to be male is to transcend oneself by extending out beyond oneself in such a way as to bring about fruitfulness in another.” The expression of sexual difference in the flesh thus presents a positive sign and instrument of the cooperative love with one another and with God for which man and woman are created.


Roch Kereszty, in “The Body and the Bride of Christ: The Church as One Unique Transcendent Subject,” explains the sense in which the Church subsists as a single agent. The Church’s oneness, Kereszty argues, is more radical than the collective interaction of her members; it is a unity of being whose principle is the Holy Spirit. “Just as he unites Father and Son while preserving their personal differences, so does the Spirit respect and perfect the personal and vocational differences of all those whom he unites with each other and with the Son.” The unity the Spirit produces in the Church appears above all in her character as Bride, a character personally exemplified in the Virgin Mother of God.


Robert P. Imbelli, in “‘He is the Head of the Body, the Church’ (Col 1:18): Salvation as Incorporation into Christ,” considers the peculiar difficulties of presenting the mystery of salvation to a secular culture estranged from bonds to one’s flesh, to one’s forebears, and to one’s community. As Imbelli shows, the universal scope of Christ’s once-for-all sacrifice, and his abiding and life-giving presence as ascended to the Father’s right hand, is a mystery that can only be communicated by those who partake in it, above all through the Church’s liturgy. “This glory . . . must become manifest in newness of life, which can only be lived if believers cohere in Christ, allowing themselves to be transformed through dependent union upon him who is their Head.”


In “When Peter and Paul Disagree: Living in Faithfulness and Charity Amid Public Controversy,” Michael K. Magee situates debates concerning the current papacy, and offers principles for sharing in this conversation in a genuinely ecclesial spirit. To this end, Magee presents how the Church understands fraternal correction of those in authority, explaining that any such critique can only be just if it is pervaded by a nonsectarian desire to receive the truth that has been handed on more faithfully and more fruitfully. “Controversy and conflict in the Church,” Magee recalls, “are not a disaster, because they provide precisely the milieu that tests our mutual charity and challenges us to preserve communion.”


In addition to our on-theme articles, we are pleased to present David L. Schindler’s “Conscience and the Relation between Truth and Pastoral Practice: Moral Theology and the Problem of Modernity.” Here Schindler examines the meaning of conscience in light of the false opposition between objective law and subjective freedom that is typical of modern thought and culture. Engaging the theological reception of Amoris laetitia, Schindler argues that certain interpreters of the document have presupposed just such a view of moral truth as extraneous to conscience in a self-defeating attempt to secure the subject’s responsible agency. Drawing widely upon the tradition, and especially on John Paul II’s encyclical Veritatis splendor, Schindler recovers an understanding of the good as intimately eliciting and empowering the human actor’s participation in the divine love that initiates his very being. On this understanding, addressing another’s conscience and accompanying him pastorally “means (re-)awakening in him the memory of a desire that he himself naturally bears in his interior depths and whose realization alone can bring true meaning and joy into his life.”


In Retrieving the Tradition, we feature a “Homily on the Annunciation” by the fourteenth-century Byzantine theologian Nicholas Cabasilas. In this homily, Cabasilas ponders the event of the Incarnation as a free exchange of gifts between God and man. For by Mary’s consent to Gabriel’s tidings, the God who “bestows benefits on the creation out of his own spontaneous largesse” also “receives something from creation”—namely, the human nature by virtue of which he has redeemed the world. Cabasilas thus finds fulfilled in Mary the fruitful bond with God for which creation was destined from the beginning. 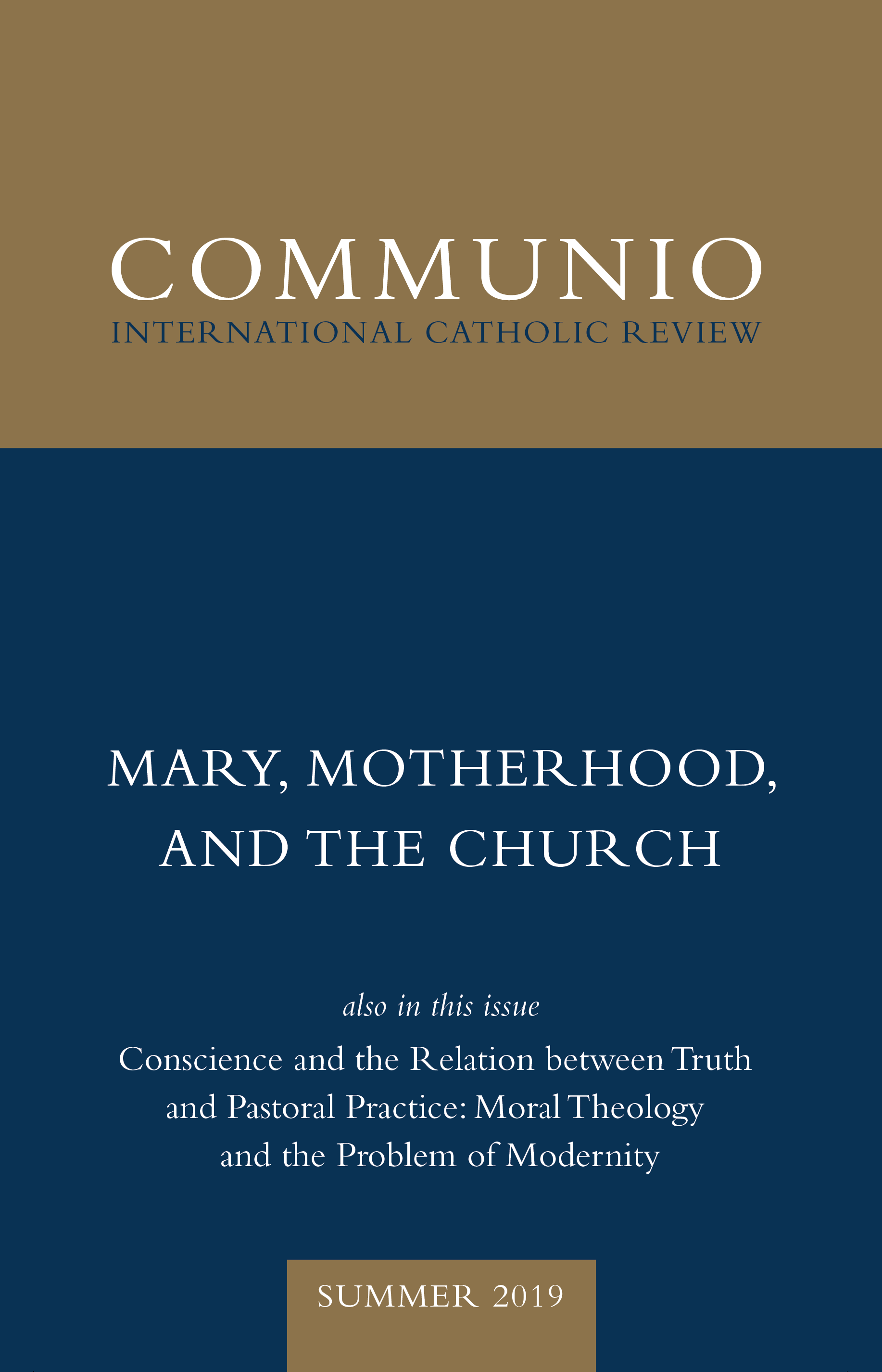