The Summer 2020 issue of Communio revolves around the theme of “Happiness, Love, and Friendship.” Since the Reformation, it has become commonplace for theologians to dispute that the faithful discipleship to Christ in which God’s promise of salvation is received has much to do with the sense of happiness as natural perfection extolled by the thinkers of pagan antiquity. In a similar vein, Immanuel Kant held the widely influential view that inclinations to happiness and the relationships in which they are realized are in principle irrelevant to the moral life, which is rather a matter of the committed performance of the duties reason alone can ascertain for and legislate to itself. With reference to many among the most substantial representatives of classical Christian thought, the authors included in the present issue bear witness instead to a joy in God and neighbor that lies at the heart of sanctity—a joy that integrates good action with contemplative rest, the life of the body with that of the spirit, and passionate fidelity with grateful obedience.

Fiona Lynch asks whether disinterested love can be present in preferential relationships in “Morality, Metaphysics, and the Romance of Friendship.” Pace Kierkegaard, Lynch demonstrates that our own desire for happiness need not be self-regarding, and so is not itself opposed to service of another’s good. Hence, Christian charity does not depart from but both preserves and perfects our most natural bonds of intimacy. “[O]nly particular friendships . . . tutor us in the kind of love God has for us, and which we hope eventually to have for all men and women.”

In “The Body and Happiness: An Augustinian Synthesis,” José Granados reflects on how our own flesh mediates to us the call to an ultimate peace in God. Following St. Augustine, Granados finds in the body a reminder of our givenness to ourselves, and in the body’s desires a sign of our good dependence upon God. “The flesh is decisive because it reveals the original love of God, who comes to our aid and shows us that it is only by letting ourselves be loved by him and renouncing our autarchy that we will be able to reach our fulfillment.” Granados affirms, in light of Dante’s Paradiso, that it is the bodily resurrection made possible in Christ that brings fully to light the communal character of the life of heaven.

“Only what exceeds our capacity can truly make us happy.” In “The Upward Pursuit of Happiness in Bonaventure’s Itinerarium mentis in Deum,” Jonathan Bieler dwells on how happiness both requires and is itself the perfect mode of self-transcendence. For Bonaventure, man’s ascent toward and into God is moved by the sacramental invitation of the cosmos, is supported by God’s presence to the soul in being and in grace, and is centered on the mediating work of Christ crucified, whose Paschal mystery also gives form to the mystic’s path. Bieler asks how the ecstatic surrender in which this ascent culminates, a rapture exemplified for St. Bonaventure by the stigmatic St. Francis, integrates sacrifice within fulfillment.

Antoine Lévy, in “Aquinas and Palamas on the Border Between This Life and the Next: An Instance of Gestalt Theology,” contends that Christian eschatology has influenced dominant outlooks on the meaning of social unity. “[T]he concept of happiness plays a key role at the interface between theological theories and civil society.” Taking Thomas Aquinas and Gregory Palamas as principal authorities, Lévy shows that, despite what they hold in common regarding the beatific vision, these two figures differ in their respective ideas of how this ultimate happiness affects wayfaring life in the world. Whereas Aquinas holds that rapturous foretastes of the beatific vision are exceptional in via, Palamas sees such experiences as the normative goal of monastic life. Lévy claims that these differing views shaped the Latin West and Byzantine East, respectively, and continue to be echoed in the societies formed by their descendants.

In “The Synthetic Transcendental: Love of the Beautiful as Integrating Intellect and Will in Gregory of Nyssa,” Matthew Newell argues that Gregory’s theology of the perpetual progress of our desire for God is grounded in his distinctive understanding of beauty. Newell draws on the Scholastic view that desire terminates in fruition to set into relief Gregory’s sense of God’s beauty as eliciting and initiating an overabundantly fulfilling transformation in man that has no limit. “God’s virtue is beautiful by nature, and, seeing it, the soul wants it. This wanting implies an imitation, and both desire and approach are limitless—a derivative, participated infinite grounded upon God’s actual infinite.”

Michael Higgins explores the reciprocal illumination between a philosophical and a theological understanding of God’s beatitude in “Does Goodness Require Another? On an Underappreciated Corner of Aquinas’s Trinitarian Theology.” Noting that Aquinas never concedes that reason could deduce the Trinity unaided by the light of faith, Higgins shows that, on Aquinas’s own account, divine perfection cannot finally be sustained unless there is in God a Word who proceeds. The Father’s enjoyment of the divine goodness in his Son and Spirit sheds light for us on the inseparability of goodness and companionship. “If the Father were simply by himself, then he would not have the fullness of joy in himself; if he did not take joy in another Person, then he could not have any joy at all.”

In “In This Way the Love of God was Revealed (1 Jn 4:9): Atonement as a ‘Patrogenetic’ Process (Part II),” the first installment of which was published in the Spring 2020 issue of Communio, Margaret M. Turek continues her examination of how the salvation wrought in Christ is rooted in God’s trinitarian life. Turek ponders God’s gratuitous forgiveness of sin as an event of reciprocal love, as is manifested in the repentant sinner’s rightful and even necessary role in freely atoning for his own transgression. Not only is this responsibility that is entrusted to the penitent grounded in the incarnate Son’s filial suffering of God-forsakenness for us, but it even belongs intrinsically to our inclusion within the Son’s eternal begetting from the Father. This means, in the end, that created love’s power to suffer estrangement from God has its source in the Father’s goodness. “God the Father wishes to be Father to his Son in all men.”

Finally, we publish an obituary of Fr. Abbot Denis Farkasfalvy, who died in May 2020, written by a fellow Cistercian. Among his many works of service to his order and to the Church, Fr. Farkasfalvy was a contributor to and Consulting Editor of the American edition of Communio. “No one who met Fr. Denis was left unimpressed; as was said of St. Bernard, he was amore terribilis, terrore amabilis, terrifying in his love, loveable in being terrifying.” Requiescat in pace. 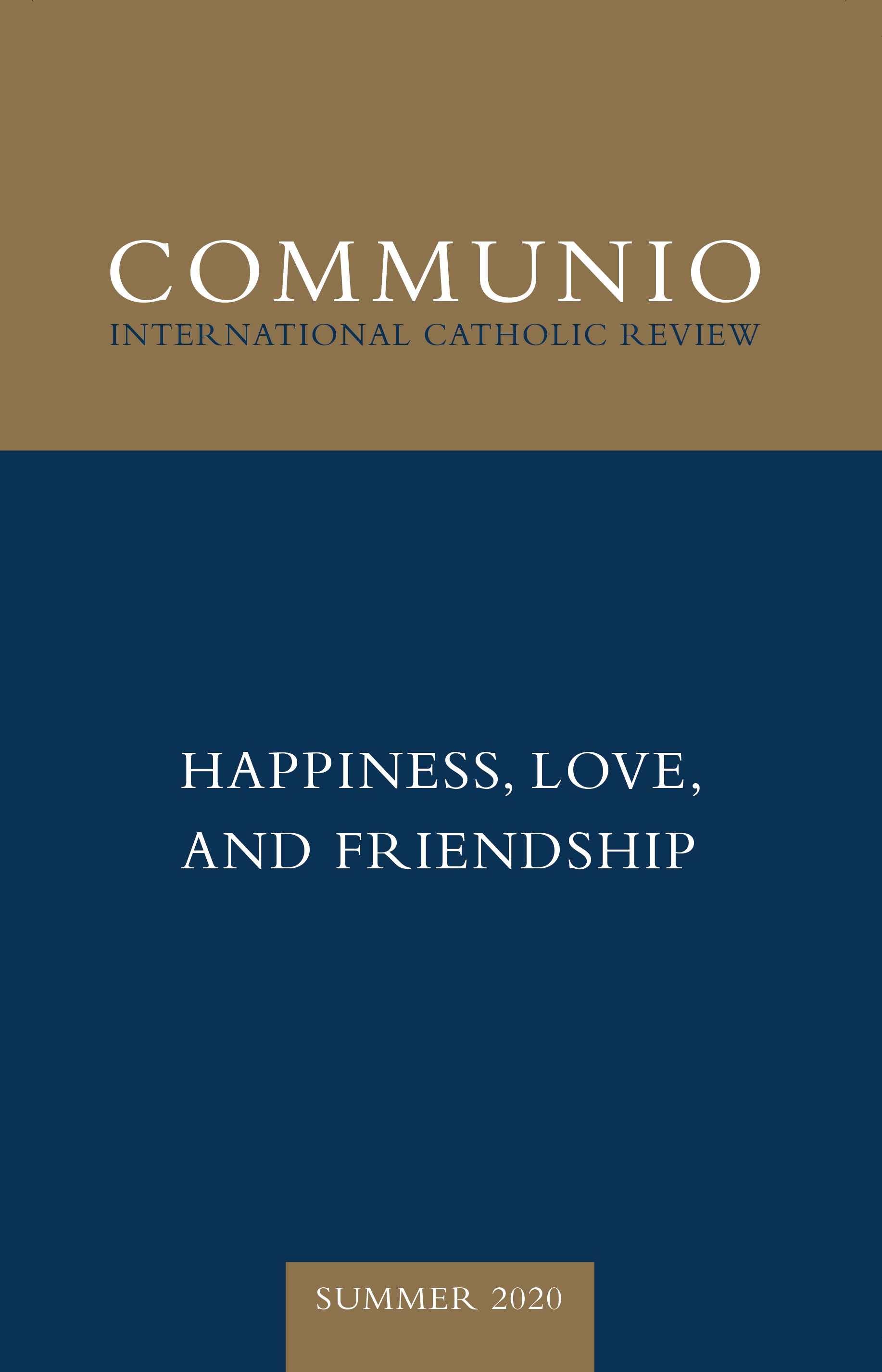