The Winter 2015 issue of Communio is dedicated to the theme of “Integral Ecology.” This phrase, characteristic of Pope Francis in his encyclical Laudato si’, reminds us that man is part of creation, but also its steward; and that the good of nature and the world, on the one hand, and the good of man, on the other, can never be separated.

David L. Schindler, in “Habits of Presence and the Generosity of Creation: Ecology in Light of Integral Human Development,” lays out the necessary principles for an adequate ecology, and concludes with an analysis of the deep-seated root of the problems facing our culture. He insists that no real understanding of human and ecological development can be reached without the knowledge of God’s primacy as Creator and Redeemer, or the recognition of “the gratuitousness, hence generosity, inherent in the act of creation.”

D. C. Schindler’s “Work as Contemplation: On the Platonic Notion of Technê” asks whether work has intrinsic meaning, or is only a kind of necessary evil. Drawing from Plato, Josef Pieper, and Matthew Crawford (philosopher-motorcycle mechanic), Schindler argues that “the meaning of the world and the meaning of man jointly come to expression in a decisive way in work.” Work articulates the metaphysical reality of man’s union with, and stewardship of, all of creation. However, we remain always in danger of reducing work to its merely pragmatic value, evacuating it of meaning and thereby obscuring the right relation between man and the world.

Mary Taylor’s “Ecology on One’s Knees: Reading Laudato Si’” suggests that any attempt to read the encyclical through a strictly political, ecological, or economic lens misses its point: that the true key to reading reality itself, in all its beauty and grandeur, is the Creator God. Often recalling the vision of Dante, Taylor proposes that “the logic of ‘creation as gift’” is the encyclical’s radiant center foundational principle.

Susan Waldstein’s “Reading Natural Hierarchy in a Trinitarian Key” shows, against the background of both St. Bonaventure and St. Thomas, that the entire order of nature, from inanimate rocks to human beings, is a display of the splendor and generosity of God. The differences we see in creation and the hierarchy of creatures are not random. On the contrary, they are the result of the infinite beauty and goodness of God: “Creatures must be essentially different . . . so that they can represent God’s goodness in different ways and degrees.”

In “Economics, Ecology, and Our Common Home: The Limits of a Preference-Based Approach to Human Behavior,” Patrick Fleming encourages a rethinking of some fundamental principles of the modern discipline of economics, in light of integral ecology. Economics, says Fleming, tends to measure well-being and success only in terms of material growth, and in abstraction from particular persons. Thinking economics in terms of an integral ecology, however, is “necessarily personal,” and would take into account the good of the concrete person, and hence also his household and local community.

Michael Hanby’s “The Gospel of Creation and the Technocratic Paradigm: Reflections on a Central Teaching of Laudato Si’” explores how technology understood as both a hermeneutic of reality and a kind of historical fate affects every contemporary conception of human development. Drawing on the encyclical’s foundational principles, Hanby shows that there is a difference between having an environment and living in a world. Technology, with its peculiar form of abstraction, leads one to see only an environment conceived in terms of separate and unrelated “parts.” What is needed is an ontological recovery of creation: an integral ecology will include “a defense of creation that requires in turn the rebirth of natural philosophy and ultimately metaphysics as comprehensive and integrating forms of knowledge.”

In “Seeing with Christ in a Culture of Power,” Christine Myers continues reflection on a fragmented world with the help of theologian Roman Guardini, whose work has influenced both Pope Emeritus Benedict XVI and Pope Francis. Guardini foresaw the disintegration that modern thought would bring; and he therefore dedicated his work to recovering a wholeness of vision tied to the relationship between faith and reason. “[T]he obedience to truth’s appearing in the world dovetails with the obedience of faith in receiving God’s self-revelation.”

In Retrieving the Tradition, we reprint “Created by God,” a selection from Guardini’s The Believing Human. Guardini reviews several historical alternatives to creation—chaos myths, the neo-Platonic one, the Mayan illusion—in order to highlight the radicality of the phrase “God created.”

In Notes & Comments, Jesse Straight’s “The Coherences of Home: Life on Whiffletree Farm” provides a concrete picture of an integral ecology, starting with life on a small family farm. Straight explains that he directs and orders his farm according to two main principles: “(1) we try to humbly let nature be our guide and (2) we try to benefit all parties involved.” He insists on working with nature, emphasizing that the good of his land and his animals is intrinsically related to the good of his family and his customers. The two goods are never antagonists. 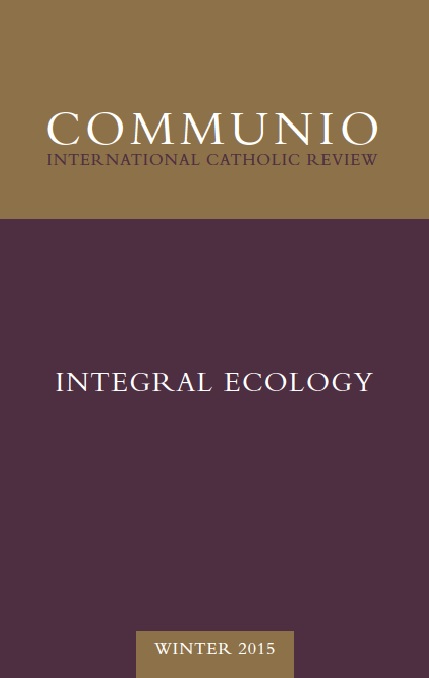