The Winter 2020 issue of Communio is dedicated to “Commemorating the 100th Anniversary of the Birth of Karol Wojtyła.” The essays collected here celebrate this milestone by gathering the fruits of his teaching both as philosopher and later as pope. These authors attend especially to Wotyła’s understanding of personal dignity and meaningful human action before God. They recognize too that Wojtyła bore witness to a fulfilled life in Christ not only in his thought but first in his way of life, above all through the holiness with which he lived out his office as Pope John Paul II. In keeping with this reception of John Paul II’s legacy, several articles explore the theme of conscience and its relation to the authority both of God and of the papacy. Pope St. John Paul II embodied the truth, which his successor Benedict XVI held dear, that obedient recollection of God liberates the human person so that he can authoritatively share in the sanctification of his fellow man.

Livio Melina discusses Pope St. John Paul II’s radical response to modernity’s destabilization of natural bonds in “The Mission of the Christian Family According to St. John Paul II.” The crisis of family life in our time is no isolated dilemma, but instead flows from an underlying ideology that, in the name of securing individual liberty, denies the enduring relevance of our most fundamental relationships. But, as John Paul II never failed to testify, the family is itself the very place where man discovers his own personhood and grows into his freedom, and this because he is made for belonging to and abiding with others. “Recognizing the family as the original community means placing communion in the beginning, as the initial truth, and not just as a project that is the result of an agreement.”

In “John Paul II’s Theology of the Body: A Path toward the Source,” Livio Melina examines further how man’s natural embodiment is the first sign that he is made for membership in community. According to Melina, St. John Paul II leads us to recognize that the flesh, including the sexual difference that is expressed therein, is essential to man’s path to happiness in God. “The body speaks to us first of the origin from which it comes: openness to God and the call to a filial relationship with him have priority vis-à-vis the spousal relationship.”

In “I Can Only Be Understood From Within: Introducing The English Critical Edition of the Works of Karol Wojtyła/John Paul II,” Antonio López ponders how St. John Paul II’s thought was guided by the sanctifying work that he received with the papal office—that is, the task of passing down in the present day the ecclesial tradition whose source is the Father’s handing over of the Son out of love. This work on behalf of the Church and the world is sanctifying in that such communication always demands the personal reception of and conformation to God’s self-giving in Christ. “The saint, therefore, not only embodies the question and drama of his historical era but is also given a thought or insight into the divine mystery revealed in Christ, which then becomes his task to unfold obediently, gratuitously, and laboriously so that all persons may become reacquainted with the ‘whole,’ that is, with the truth of God and man.”

Michael Waldstein takes up a seminal theme in Karol Wojtyła’s philosophy in “Person and Nature According to Wojtyla’s Person and Act.” In his anthropology, Wojtyła sought to overcome the characteristically modern opposition between consciousness and a mechanically conceived universe by restoring the priority of ordinary experience and corporeality for the philosophical act. Integrating the best insights of phenomenology with classical Christian metaphysics, Wojtyła affirmed nature as the gift that is appropriated and unfolded throughout responsible human action. It is in this sense, Waldstein argues, that Wojtyła spoke of freedom as “self-determination,” a term implying “that the person has power over himself and, more fundamentally, that the person belongs to himself and can exercise this power legitimately.”

Grzegorz Ignatik, in “Reason, Value, and the Holy: An Introduction to Karol Wojtyła’s ‘The Lived-Experience of Value in the Act of Faith,’” presents the concerns that stand behind Wojtyła’s essay, also included in this issue. With reference to Rudolf Otto and Max Scheler, Ignatik examines how the term “value” is understood by such phenomenologists in a manner that is too closely bound to the subject’s own powers, a standpoint that cannot adequately make sense of the experience of faith. Wojtyła seeks instead to root value in being, above all in a metaphysical account of the good, where the reality of things orders and liberates our subjective experience. “Wojtyła concludes that in order for the phenomenological insight into the act of faith to be beneficial for us, it must be situated within the distinctions and structure developed by the traditional theology based on metaphysics.”

In “The Lived-Experience of Value in the Act of Faith,” Karol Wojtyła examines how human cognition is elevated by the grace of faith beyond its natural aptitude, arguing that this event thereby transcends the description it can receive in a typical phenomenology of value. For such phenomenology situates all truth, including that of the “holy” or divine, solely within the domain of natural experience. This limit cannot account for the way in which faith offers “a real participation in the knowledge by which God knows himself.” For Wojtyła, this critique nevertheless gives rise to the challenge and promise of transforming a phenomenological approach to reality in accord with the lived-experience of revelation that fulfills nature in surpassing it.

Todd A. Salzman and Michael G. Lawler respond to David L. Schindler’s article that appeared in the Summer 2019 issue of Communio in “A Dialogue with Professor David L. Schindler on Conscience, Moral Theology, and Modernity.” The authors present here their shared understanding of the place of conscience in human action, acknowledging a basic agreement with Schindler that God is present in the natural constitution of the human person. They clarify, however, that their approach to natural law grants primacy to the finite subject’s role in making practical judgments regarding facts that, they hold, do not themselves express moral values and obligations in their very order. “In reality, we have no experience of uninterpreted pure nature; we experience nature only as interpreted and socially constructed by rational, social beings.”

In “Conscience, Moral Theology, and Modernity: A Reply to Professors Salzman and Lawler,” David L. Schindler addresses the sense in which God is objectively present to the human mind and conscience. God’s presence, Schindler maintains, is given already in the nature of things in such a way that each creature is to be received as an intrinsic bearer of meaning. Unlike Salzman and Lawler, Schindler thus affirms that nature as given does provide an authentic standard for moral judgments, and that this alone yields a sufficient foundation for the subjective act of freely and creatively taking up the reality that precedes the agent. “[T]he human being, in knowing things, does not give them an actual meaning where there was no meaning at all! On the contrary, he or she gives them a newly extended and deepened meaning. . . . [T]hings in their original nature as created are never ‘actually meaningless.’ They always actually participate, as creatures, in the mind and will of God.”

In “Ratzinger’s Reception of Newman on Conscience: Memory, History, Creation, and Christ,” Donald G. Graham shows how Ratzinger follows Newman’s understanding of conscience as the calling and commanding voice of God in the human heart, a voice that has a more fundamental bearing on human action than any created authority. Graham argues that Ratzinger goes further than Newman in explicitly grounding this sense of conscience in the very being of man as created. Moreover, this ontological account of conscience as anamnesis, or “primal remembrance,” at once brings to light the vicar of Christ’s rightful responsibility to guide man to his end in God. “God who originally spoke, and continues to speak, through the properly functioning conscience as his witness to truth in the created order, now also can speak authoritatively through the Magisterium, in particular through the Petrine ministry, as the servant of and witness to his accomplished work of redemption in the order of grace.”

Retrieving the Tradition features two reflections by Hans Urs von Balthasar, one of Communio’s founders. In “A Pontificate under the Banner of Mary,” Balthasar identifies prayer as the principle that animated the ecclesial mission of Pope St. John Paul II. It is this, Balthasar says, that stands behind the pope’s sensitivity to the reality of the person, as well as his recognition that “the whole good news about God, including the mysteries and sacraments of the Church—yes, including the revelation about God’s one and triune loving nature—is addressed wholly and entirely to the human being.” Moreover, this personalistic approach born of prayer is an expression of John Paul II’s devotion to Mary, the model of the Church to whom the Petrine office always refers.

Finally, in “A Commentary on John Paul II’s Dominum et vivificantem,” Hans Urs von Balthasar interprets John Paul II’s encyclical on the person and role of the Holy Spirit, emphasizing how intimately the giving of the Spirit belongs to the inner logic of the economy of salvation. In bringing to light the judgment of sin effected by Christ’s death on the Cross, the Holy Spirit mercifully frees the sinner to share in the ecclesial life that is the universal fruit of Christ’s sacrifice. This gift fulfills the logic of redemption as the utmost disclosure and impartation of the Father’s heart. “Therefore, the whole masterwork of creation, as the pope never tires of recalling, is always already directed toward the revelation of the Father’s love in the Cross of Christ and in the outpouring of the Spirit into the heart of man, so that there is no other valid meaning to human life, and no other valid way for man to understand himself, than as created for the mystery of love.” 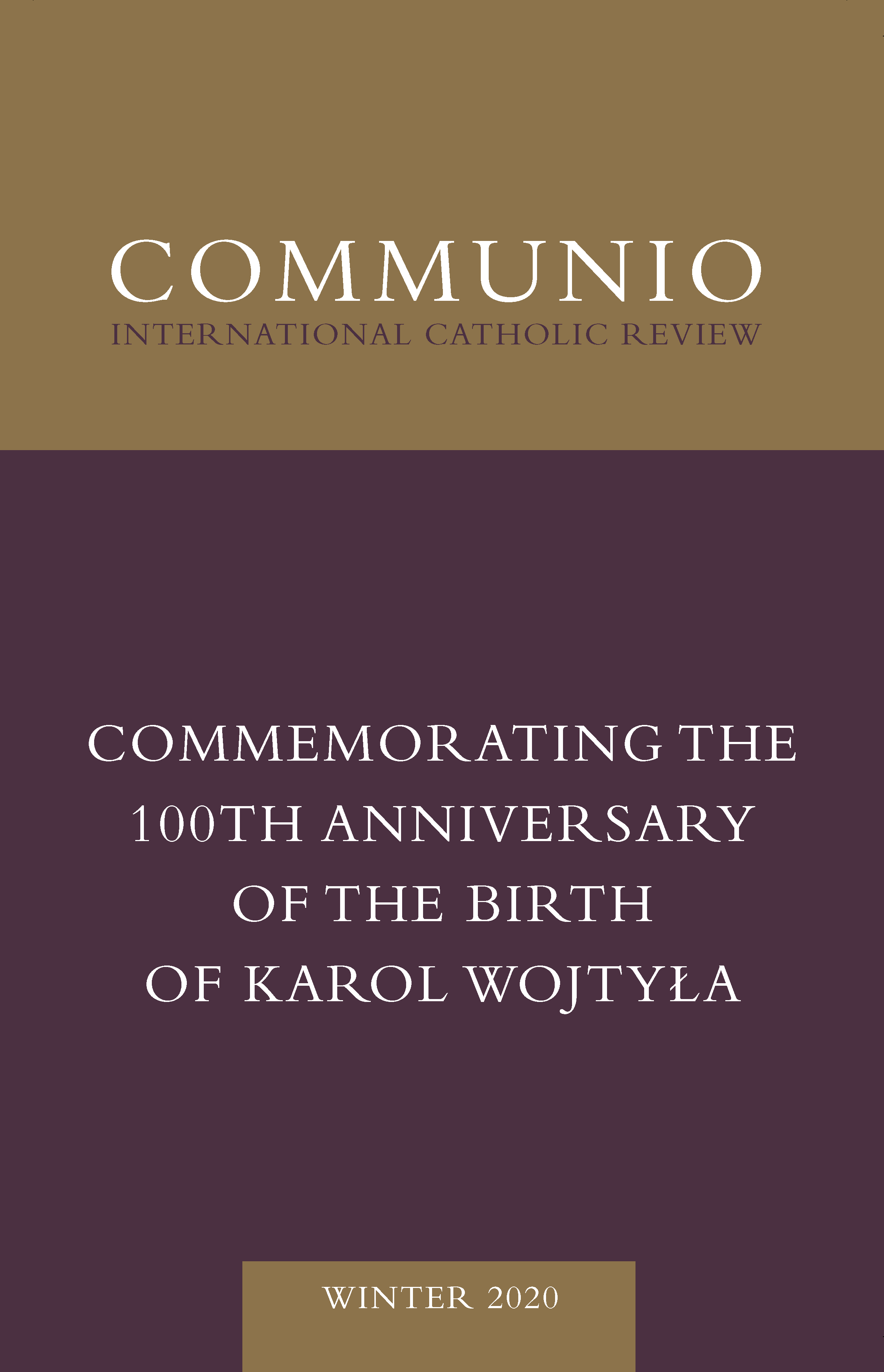